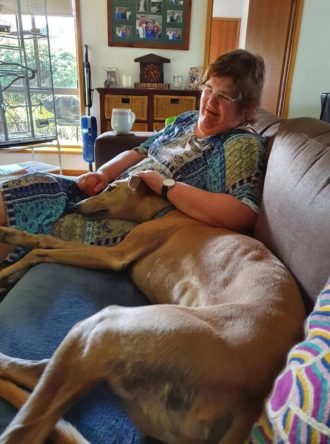 Just over two years ago I adopted my first dog. It was both terrifying and exciting bringing him home. Dreamy was a 37 kg greyhound. A friend suggested his name as it rhymed with his kennel name, Meany.

When we arrived home after a 5-hour trip from the place I adopted him he did all that a boy dog does. He jumped on my bed, peed on an ottoman and drank from the fishpond. Excitable, and boisterous, his behaviour frightened me. He threatened my control. My house had been my safe place, tidy, quiet and peaceful with everything in its place.

I intended that he would stay outside when I was at work and inside when I came home. He had access to my laundry where I placed his bed. To my horror he ripped 4 beds, chewed the door frames, scratched the walls, ripped a plug from the wall and ripped the outside awning. I never knew what I would discover when I opened the laundry door. One day I found a leather bag which had been stored on top of a high built in cupboard ripped to shreds on the floor. We tried natural sprays, soft music, toys to distract him, and I changed his diet. Nothing worked.

We visited his vet who said it was most likely separation anxiety. As a trial, I left him inside. He settled on my bed where he could be near me. To this day, he has never damaged anything in my bedroom. This was the answer. He wanted me.

Dreamy had touched a core issue with me. Like him, I had been unwanted. As a child I was insecure and clung to my mother. In the first few years after leaving home I had been bereft, afraid and lonely.

My frustration dissolved and I gave him what he needed, and I needed. Although it was difficult to face my own buried feelings, I chose to let him in. The bond we shared taught me to have compassion for myself. The feelings of shame from my early years were healed as I embraced him. We understood each other’s need of closeness.

He has become my companion, a cuddly, loving, soft and gentle partner.