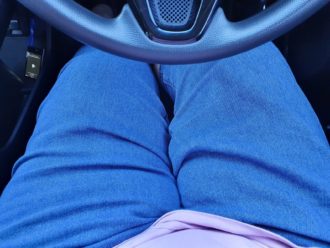 Today I am grateful. My stomach once touched the steering wheel of every car in which I sat. But my journey to health has not been an easy one. I was determined not to become like my mother who died young from complications from diabetes.

Losing weight to create a healthier life seemed impossible. I had been obese since childhood, lived a sedentary lifestyle, and I had a significant amount of weight to lose. It was the enormity of this which made me feel helpless. How could I lose this weight?

To my mind I was not worthy of my own effort. The voices of my past haunted me, and cultural pressure reinforced my feelings of unworthiness. But I had a close friend who believed in me and had the wisdom to help me step out of this psychological abyss.

It was hard journey; my size brought with it many problems. When I exercised, I sweated heavily causing infections and rashes under the rolls of excess flesh. My joints and muscles hurt with every step, blisters formed on my feet and the soles became numb from the pressure they carried. Despite my improving health and fitness, my body hurt from the dramatic change in lifestyle and the nerves on the soles of my feet were permanently damaged.

For the first time in years, I menstruated. Morbid obesity had impacted my hormones, but now this was changing. As my hormone levels became more balanced, I experienced mood swings, sickness, and a lowered pain threshold in each cycle. It was as if my body was making up for lost time.

Then, as the weight decreased, poisons stored in my fat cells were released into my body. My immune system fought the toxins bringing flu-like symptoms and fatigue. The poisons had come from toxins my body had absorbed in my childhood. The dark skin on my wrists, elbows and neck which had developed from childhood obesity turned pink as my hormone balance became healthier.

The stress from dealing with childhood issues and lifestyle changes led to adrenal fatigue (now known as adrenal dysregulation) which is commonly present when suffer from chronic fatigue. My body ached and the exhaustion prevented me from exercising. I developed an irritable bowel which can be a result of chronic fatigue. Then came food sensitivities, stomach pains and flu-like symptoms as my body reacted to the food I was eating. I changed my diet to eliminate over 60 foods. After three days of releasing fluid, my body stopped reacting, the stomach pains and flu-like symptoms eased, and my joints stopped aching.

Although I had lost a significant amount of weight, I was still obese and at the mercy of a judgmental society. My skin was loose and saggy, rolls of flesh hung from my body. It wasn’t until I underwent 3 surgeries to remove the flesh that the worst of the judgement ceased.

There were moments on this journey where I wanted to give up. But the alternative was a short life. I rationalised that I would have pain both ways; either by the sicknesses caused by morbid obesity or the result of weight loss. Either way, I knew that coming out of obesity was going to be a long haul.

Looking back, I am grateful for what I have experienced. The difficulties have made it worthwhile. There is certain satisfaction in attaining something we have worked so hard for. And the life I have now far outweighs the pain I endured in the process. It has been worth every painful step.

The most important ingredient to this journey has been the support of others. I could not have done it without people cheering my success. If you are embarking on your health journey, or struggling to maintain your focus, send me a message.