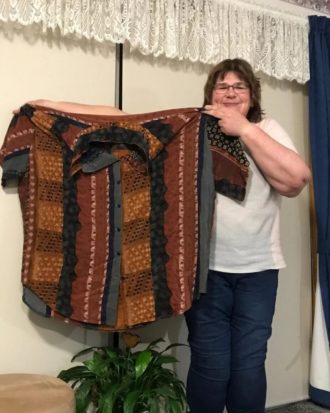 Growing up in a dysfunctional and abusive family, food was my escape. Genetics were not on my side either. Both my mother and father struggled with obesity and diabetes. Mum used food as a means of emotional comfort. Food was the main way we related as a family. It was the answer to everything in life.

These conditions were a “perfect storm.” I had an insatiable hunger for food. Bigger than all the other kids at school, I weighed 290 pounds (132 kilograms) by the time I was 12.

Rolls of fat had grown over my abdomen and under my breasts. Rashes and ulcers festered; my skin turned dark around my wrists, elbows, and neck; my period stopped; and hair grew on my face. I was obese and I was ashamed of myself, and so were my parents. Discrimination followed me wherever I went.

My life was sedentary. The smallest walk made me breathless, sweaty, and fatigued. I could not fit into seats, my car dipped on the driver’s side, and people stared at me. My diet consisted of sweet and fatty foods. By my late 20s, I reached around 551 pounds (250 kilograms). My health was on the same road as Mum’s, who died young. Depressed and believing I was worthless, I lacked motivation to change.

Then, a friend saw beyond the rolls of fat. She cared enough to let me know her. She wondered what her life would be like without me. I mattered. This was the turning point. For the first time in my life, I chose to take care of myself. Working on my shame and the psychological pain of my past was the only way I could bring about real change to my lifestyle. There would be no quick fix. I set about dealing with my destructive coping mechanisms.

At 551 pounds, I began walking. Exhaustion, blisters, hurting joints, burning legs, and a sore back made it difficult. But I walked every day. Some passers-by mocked, some worried I would die, and others complimented me. Rubbing worsened the rashes beneath my folds of skin. My posture was poor from childhood obesity.

I altered my diet, reduced my intake of processed foods, and ate foods with reduced fat, low sugar, and low glycemic index instead. It was a slow process, changing one thing at a time with my insatiable desire to eat drawing me back to old patterns.

Hormonal fluctuations brought about emotional swings and abdomen pain. Then I developed flu-like symptoms along with exhaustion and depression. Finally, I was diagnosed with adrenal fatigue from the stresses of my childhood and physical changes.

As if this weren’t enough, my thyroid died, and I gained weight. I was devastated; all my efforts were wasted. Advice from medical staff reinforced my sense of failure. Obesity defined my life and that was how they saw me. Yet I pressed on, hoping that things would improve.

Then my friend showed me a pamphlet advertising abdominoplasty, the removal of excess skin from the abdomen. Terrified of being rejected for my weight, I decided to go through with the procedure.

The removal of the fat cells triggered weight loss. They were formed before puberty and were affecting my metabolism.

I had the next roll up removed. When the surgeon visited me in the ward, she said, “You have a new life now.” She was right. My first taste of freedom came when I had a coffee in public. For the first time in my life, no one stared at me or mocked me. I was invisible.

And finally, I took a test that revealed intolerances to over 60 foods. During the first three days of eliminating these items, I lost fluid. Then my abdomen pains subsided. My head was clear, my joints stopped hurting, and the fatigued lifted.

After the final surgery, the enormity of it all began to sink in. At first, I could not comprehend it. I wanted to scratch in places that no longer existed, and I found myself grieving. Without the fat, it was clear that I was big-boned, stocky, knock-kneed, and hunched from obesity. Mum’s diabetes had left me with a large chest cavity.

Despite the disappointment, I began to accept the immense physical and psychological changes. I was free, healthy, fit, and a good weight for me. My work prospects greatly improved. I am an accountant and HR manager, and teach part-time at the local university. I have adopted a rescued greyhound, who has become my daily walking partner. I am currently writing a book about my journey.