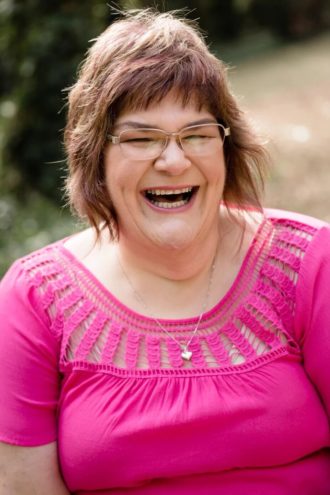 Through my eyes: Weight loss surgery

I grew up in a dysfunctional and abusive family where food was my escape. Even the shortest walk left me breathless, sweaty, and fatigued.

Genetics was not on my side, as both my mother and father struggled with obesity and diabetes.

Mum used food as a means of emotional comfort, and food was the main way we related as a family. It was the answer to everything in life.

These conditions were a "perfect storm." I had an insatiable hunger for food. I was bigger than all the other kids at school, and by the time I was 12, I weighed close to 300 pounds (130 kg).

Rolls of fat had grown over my abdomen and under my breasts. Rashes and ulcers festered, my skin turned dark around my wrists, elbows, and neck, my period stopped, and hair grew on my face.

I was obese and felt ashamed of myself, and so did my parents. Discrimination followed me wherever I went.

My life was sedentary; the shortest walk made me breathless, sweaty, and fatigued. I could not fit into seats, my car dipped on the driver's side, and people stared at me.

My diet consisted of sweet and fatty food, and by my late 20s, I reached around 600 pounds (250 kg). My health was on the same road as mum's, who died young. Depressed and believing I was worthless, I lacked the motivation to change.

Then, a friend saw beyond the rolls of fat. She cared enough to let me know her. She wondered what her life would be like without me. I mattered.

This was the turning point. For the first time in my life, I chose to take care of myself.

Working on my shame and the psychological pain of my past was the only way I could bring about real change to my lifestyle. There would be no quick fix. I set about dealing with my destructive coping mechanisms.

Hovering around 600 pounds (250 kg), I began walking. Exhaustion, blisters, hurting joints, burning legs, and a sore back made it difficult. But I walked every day. Some passers-by mocked, some worried I would die, and others complimented me. Rubbing worsened the rashes beneath my folds of skin. My posture was poor from childhood obesity.

I altered my diet, reduced my intake of processed foods, and ate reduced fat, low sugar, and low glycemic index foods instead. It was a slow process; changing one thing at a time, with my insatiable desire to eat drawing me back to old patterns.

What are the treatments for obesity?

A number of treatment options can help people to achieve and maintain a suitable weight.READ NOW

Hormonal fluctuations brought about emotional swings and abdomen pain. Then I developed flu-like symptoms along with exhaustion and depression. Finally, I received a diagnosis of adrenal fatigue caused by the stresses of my childhood and physical changes.

As if this wasn't enough, my thyroid died, and I gained weight. I was devastated; all my efforts had gone to waste. Advice from medical staff reinforced my sense of failure. Obesity defined my life, and that was how they saw me. However, I pressed on, hoping that things would improve.

Then, my friend showed me a pamphlet advertising abdominoplasty, the removal of excess skin from the abdomen. Eventually, I decided to go through with it.

After carefully weighing my options, I went through with the procedure. To my surprise, my surgeon was caring and understanding. After waking up after surgery, I was shocked to see the size of the area where the skin had once been.

For the first time in my life, I could see my thighs. I had a line of stitches that ran from near my left buttock, around my front to near my right buttock. A drip hung from each end of the stitches. The surgeon had moved my navel high up so that it looked out of place.

My lower abdomen was numb except for some spots of soreness where the nerve endings were less damaged. I wore a brace around my abdomen to keep the skin to the muscle. This was security for me as, without it, I felt vulnerable. The skin had always covered my groin; now, I felt exposed.

As my body still had a significant amount of fat above the wound site, a seroma (a fluid-filled pocket) developed. This necessitated many trips to a clinic to have excess fluid drawn from beneath the skin of my lower abdomen. I was quickly exhausted, and more than once vomited from the stress placed on my body.

Not only did this have a massive effect on my body, but in the weeks and months after leaving the hospital, my feelings swung like a pendulum.

This roll of skin had been with me since childhood, but now I was free of it, and all that was associated with it. It represented to me all that I had gone through as a child. When I walked, I no longer felt the heavy sack of flesh on my thighs. My clothes size dropped significantly.

There were moments when I grieved the loss of this piece of flesh. I remember one night weeping and questioning if I had done the right thing. I was afraid of life without this part of my anatomy. Who was I? This fat had been my excuse for so much in life. If I "failed" now, I could no longer blame my weight.

The removal of these fat cells triggered further weight loss. As the cells had formed before puberty, they affected my metabolism. It had taken me years to lose the 220 pounds (100 kg). To my mind, this was the easy way out.

One year later, I had the next roll-up of fat removed. It was necessary for my body to heal before more surgery. Although this was a lesser affair, it brought enormous changes to my self-perception. This roll ran beneath my breasts and around each side to my back, ending upward beneath my shoulder blades.

Following this surgery, the mother of my close friend bought my first "skinny" shirt in my favorite color, and to my surprise, it fit. I was concerned at first that it would show my rolls of fat, but they were no longer there. Having this area removed changed my appearance radically and how others saw me.

When the surgeon made her final visit to the ward, she said, "You have a new life now." I didn't believe her at the time, but she was right. The rolls of fat were gone, and I no longer stood out.

For the first time in my life, no one stared at me or mocked me. I was invisible. My life changed dramatically.

"I noticed something was different. In a world which shows obesity no mercy; being fat is not fun."

Another key moment was when I took a test which revealed intolerances to over 60 foods. During the first 3 days of eliminating these items, I lost fluid. Then my abdomen pains subsided. My head was clear, my joints stopped hurting, and the fatigue lifted.

Months after the final surgery, the enormity of it all began to sink in. At first, it was near impossible to comprehend what had happened. I wanted to scratch in places that were no longer there, imagined sweat under the rolls, and felt phantom pain.

I am writing a book about my journey. I aim to lift the shame experienced by those of us who struggle with obesity.

Nothing could have prepared me for the psychological effect of this surgery. My mind was the last part of me to assimilate to the changes.

I had lived with obesity since childhood. It was my identity; always the fattest kid and adult in a group.

Paranoid about my weight causing furniture or floors to fail, I still checked before sitting or walking on anything. Unable to see my back clearly, I assumed it was huge. Relationships with some people changed; my opinion was of greater value. My self-confidence increased without the judgment.

Despite this, I was disappointed. It was clear that I was big-boned, stocky, knock-kneed, and hunched from obesity. Mum's diabetes had left me with a large chest cavity. I would never be a runway model or fit into smaller sized clothes.

But working through these issues helped me to accept the immense physical and psychological changes. I was free, healthy, fit, and a good weight for me.

In the small town where I live, the locals were excited for me. They had seen me walk every day as I fought with my weight. People complimented me, saying, "You look amazing!" Peers from school with whom I kept in contact on Facebook were stunned. I was now much smaller than how they would have remembered me from those years.

My work prospects greatly improved, and so did my work attitude. I no longer felt pressure to prove my intelligence, skills, and speed.

Currently, I am an accountant and HR manager, and teach part-time at the local university. I adopted a rescued greyhound who has become my daily walking partner.

I am writing a book about my journey and studying to become a coach for others seeking support for their own lifestyle change. My aim is to lift the shame suffered by those of us who struggle with obesity.

"Within each of us lives an intelligent, inspiring individual, who has much to offer to the world."

We can overcome traumatic circumstances to live life more freely and fully.